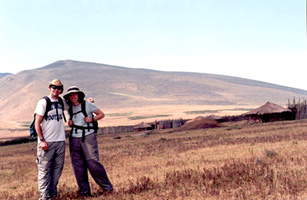 Jessica Posner and brother Dave in the Crater Highlands
of Tanzania with traditional Masai "bomas".

Greetings from Africa! It's been quite a week, let me tell you. When I arrived on May 2nd in Tanzania, my eyes were popping out of my head. Talk about culture shock and stepping out of your comfort zone. It was definitely different, not necessarily in a bad way, but not like Europe or the States. You could barely see the runway as we touched down since there is no major town around, and it seemed we landed on only the left side wheels so we zigzagged down the runway. Quite exciting really. Anyway, I got through customs in a flash (I guess it's a good thing I got my visa before I came although my passport arrived back to me the day before I left)...

My cousin Greg and his girlfriend Dorathee were there to pick me up and have been absolutely amazing. They drove me back along the main high way which had no lights, and is considered one of the most dangerous roads in Africa. I can see why. The people drive crazy here and you can't even see them coming half the time. But, it adds for extra excitement. In addition, right after leaving Kilimanjaro International airport I looked up and in the night sky was able to see the peak of Mt. Kilimanjaro. What an awesome sight. I was told by Greg that it was lucky because right now it's almost always covered in clouds. So, they took me back to their abode, just outside of Arusha (which is in the north of Tanzania and considered the main base for going on Safaris or climbing Mt. Kili). They have two cooks and a guard and a gardner. It's great, and my bed has a cool looking mosquito net around it. I also had a few visitors in my room; i.e. a tiny gecko and a lizard. They're kind of cute really.

This week I had two great experiences: a walk along my cousin's road which definitely needs 4W drive, and my excursion to Lake Diluti. Have I mentioned I'm white? Very very white! I get lots of looks and laughs, which doesn't bother me too much. But it definitely reminds me how much I stick out. I took a walk and using the few greeting words in Swahili that my cousin taught me, I had a few exchanges with people along the road. It was great! They're so very friendly. I really like the way Swahili sounds. And people carry so many things on their heads. I know in a little while it won't surprise me, but for now it's fun to see all these women, wearing beautiful batiks, walking along with huge baskets of bananas on their heads.

Yesterday I went on my own to a lake about 20 minutes away. I was the only white person in any of these buses, and boy did I get looks. But I just smiled and waved. There is so much to see along the side of the road, and the buses ("dalla dallas") drive like mad. Anyway, I got to the lake and ended up meeting a bunch of 16-18 year old school boys who spoke some English. Three of them walked me around the lake and while I helped them practice English, they taught me a few more words in Swahili. Not a bad day.

I have to go soon, but so far I've gotten much more acclimated and am heading off for three weeks tomorrow to Kenya, maybe Uganda and Northern Tanzania. Should be fun. I've gotten used to being pampered here and need to see how it is on my own. Thanks for listening to my tales. Too much to take in, let alone tell everyone about it.