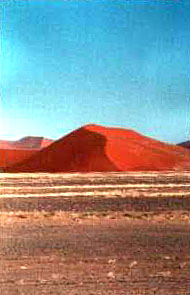 Well, I've been out of contact a while since I've been on safari for 12 days touring parts of Namibia. It's a big country with vast expanses of nothing, and few people to boot. Some parts are amazingly beautiful and other parts I could live with seeing only once. But it is quite a contrast to the past countries I've been in as there are few people to watch along the road. It's a lot more developed (my ATM card actually works here!), and there is an even larger white population. Since my brain is a bit fried from traveling so much, I think I'll just touch on the highlights and make this email short and sweet. And before I forget, Namibia has a high San (bushman population) so you hear a lot of the clicking language...very, very cool.

One of main reasons people come to visit Namibia are the dunes. The Namib Desert is the oldest desert, and reaches along the Atlantic coastline from mid-south Africa up to part of Angola. The most famous dunes are part of the Sesriem canyon which includes Soussusvlei. The color of the dunes is this dark red color, and the wind blows the dunes in all directions so the shapes they form are amazing. They're huge dunes as well. We were lucky enough to climb up one dune for sunset and then climb another for sunrise. The shadows and colors in the afternoon light and dawn were phenomenal. As I ran down the dune (which was soooo hard to climb and winded me completely) I got such a rush. Africa can drive you bonkers with its chaos and inconsistencies but it can also amaze you equally so. It's what makes it so people come back another time. I saved some sand from those dunes if any of you wants to see and feel back in California.

In addition to the dunes, I visited Fish River Canyon which is much smaller than the Grand Canyon but still quite stunning...and then there was the coastal town of Luderitz where we saw three dolphins and many seals. It's a pretty rough coastline and very desert like too...quite different from the Indian Ocean. Que mas? We hiked one day in the Klein Aus Mountains which have a great view looking out to the Namib desert. The colors on the granite in the evening were amazing. And this time I slept out under the stars...the sky in Africa is absolutely amazing. There is so little light pollution so you see so many stars and the milky way is incredible. I will miss that at home.

My group was an interesting mix of two 50 year old French couples who were so sweet but spoke very limited English, 2 German women, a young German guy, an English woman and our guide who is a white Namibian. It was strange to have only two English speakers in a group of 10. It was really nice to have a set group for a seven day period...so far, since Uganda, I haven't traveled with anyone outside of my family for more than three days. It's nice to meet people for a little while longer this time.

The last day of the tour we arrived to Swakopmund - Swakop in one of the local languages means sh*t. Kind of funny, but it has to do with the Swakop river and all the cow sh*t that used to end up at the delta of the river where it fed into the Atlantic. In Swakop, like Vic Falls, there are lots of adrenaline-type activities to keep you fully occupied. I decided to try sand boarding - out of quad biking, horse back riding through the dunes, sky diving and probably a few other things. Sand boarding can either be like snowboarding, or simply using a rectangular waxed piece of board and heading face down the dune till you get to the bottom. I opted for the second type and so I hurtled head first down these high dunes looking over the Atlantic. It was terrific! There was enough adrenaline pumped to give you a good rush, but not too much to not enjoy the experience. We were unlucky in that the Easterly winds were up (a warm wind coming from the east as compared to the colder winds that whip off the Atlantic)...this made climbing the dunes very difficult. Supposedly they only come about a few times a year and we were lucky enough to be there on one of those days. It was still a blast and I have a video to show for it. Someone described the experience as getting intimate with the dunes, and it really does feel like that in a way. On the last dune ride called 'dizzy' you can reach speeds of up to 80 KM...I didn't go THAT fast, but fast enough.

Upon returning to Windhoek, I was trying to figure out where to go next. At the last minute, I went with another six day tour to visit the Himba people and to the Skeleton coast. The Himbas were amazing. The women paint themselves with a mix of ochre (a soft red colored stone) and butter. They have amazing skin that is of a very red tone but oh so smooth. They also live quite long - at least into their sixties. Like the Masai, they are pastoralists, but they are not as warrior-like as the Masai. At first it was a bit awkward. Mandela, our guide, brought us to his home which consisted of multiple huts, a stall for the goats and cows, and fenced in with wood. Very simple but nice. We were introduced to his father, who is the head of that village and once we gave them their present of food, we were able to walk around as we pleased. It felt a little like being at a zoo, but as we got more comfortable and hung out with his mother and sisters and half sisters (polygamy goes strong in this tribe), we relaxed and so did they. The kids were very cute. We started playing with them later, including playing with a make shift soccer ball.

The next day we woke and returned to watch the women milk the cows, (which they do twice a day) and then went inside one of the huts. It was compact but cozy with a fire inside. The walls were made of dung which could explain the smell. It was a really nice visit with the people, especially since I've felt more removed from the local people in Namibia. It was my first experience of visiting a village in this way, and in some ways it could seem quite artificial, but I don't think we disrupt them too much and it's quite educational for both parties - the tourists and the Himba. The rest of the tour was great and the group - two Belgians, a French couple, an English bloke, a German woman I met on the last tour, an English tour guide and myself - all spoke good English and were all more similar in age. I was glad for my spontaneity.

Now I'm pretty much through with Namibia and about to head on to S. Africa. I would have liked to have visited Etosha - another game park, but I didn't have the time. Oh well, another visit. I am tired of traveling in a way, and I'm planning to just hang out for a week in Cape Town doing nothing before I start to sightsee again. There's just so much to see and do and while I'm here I want to take advantage. Plus, S. Africa is set up even better for the backpacker than any of the other countries I've visited. Should be fun.

Hope you're all doing well,